Yesterday I went to Stitch Solihull and finished the “Pimpelliese” shawlette I’d been knitting. There was some chat about Ravelry, the knitting and crochet website. I am a member, and regularly log on to search for knitting patterns, but had no idea of all the other things you can do.

I have photographed, catalogued, and inventoried my “stash” of yarn, which makes life so much easier. Then I ordered some big plastic boxes and sealable plastic bags for storage, which is currently mostly IKEA bags and just a big mess. Felt very smug indeed. Next, catalogued and inventoried *all* my knitting needles, which after 51 years of knitting is A Lot. Not only is it now all listed and nice and easy to look at, you can view the inventories in a variety of ways – chart, with or without photos, and even download the information in spreadsheet format to your computer! Excellent. And all free.

Then I discovered that at least two of the Stitch Solihull members are also on Ravelry and we are now “Ravelry” “friends” – much the same as on facebook. Excellent, again.

So tonight I’m planning to start another “Wingspan” shawlette, in blues and greens, with King Cole ZigZag sock yarn. I have to have a little “space” between knitting projects. I could have cast on, in theory, last night, but like when I’ve finished reading a book, I need a little time before starting the next one. Just to get the plot and characters out of my head (only with knitting it’s the pattern and colours). Only 24 hours, you understand, don’t need longer than that.

Tomorrow the shopping is being delivered, which is my main task for the day. Putting it away, I mean. Hubby and I do it together but I always end up exhausted. Pathetic.

Saw the GP today. Apparently my red blood cells are too big, which can indicate anaemia, but my B12 and folate levels are fine. She’s going to write to the haemotologist to see what’s what.

The weather yesterday was spectacular. A thunderstorm which involved thunder rolling continuously for about an hour, with regular lightning flashes too. Cat was a bit bothered. We switched off both our computers, but the modem and router were still on. Hmm. Anyway, no problems.

Made a chocolate cake on Wednesday with beetroot. Yup, beetroot. It’s ok, but I think I overcooked it a bit. The recipe said to use a 900g loaf tin, and I only have two 450g loaf tins, so used those and cooked it for less time. But clearly still too long. It’s a bit dry, but will be fine with ice cream or sorbet. Which I have ordered for tomorrow.

Also found and ordered some Lindt plain chocolate with sea salt, which has been highly recommended, so I am interested to know what that’s like. Chocolate with chili is lovely, although you wouldn’t think so, but I have tried it and it’s very nice. Just a subtle after-taste.

Time for The Archers. An everyday tale of country folk (aka “soap opera”). 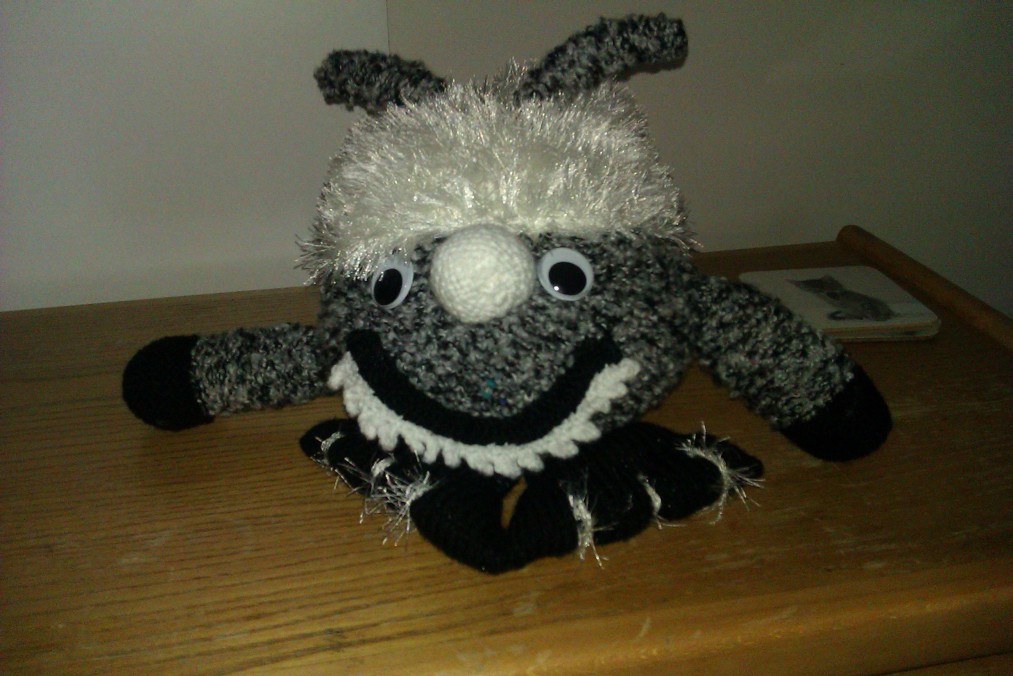 Now on to knitting birthday presents and Xmas presents – can’t of course give too much away because I don’t know who exactly reads this blog, except of course for my lovely friend Rejane.

Tomorrow is Father’s Day and we have been invited to hubby’s YS for lunch in Malvern. It will be just wonderful to see them and two of the grandchildren. Lovely.

Have been watching lots and lots of football. It’s agony watching England play, and I can’t decide whether that’s because it’s “my” country’s team, or because they have a tendency to score one goal and metaphorically sit back and think “oh, that’s ok, we’re safe now”, whereas in fact they need (as proved by last night’s match against Sweden) they need to get at least another two goals to be anywhere near safe.

But when I’m watching other countries’ teams play I just enjoy the game. It must be because England is “my” team.

But by golly what goals they were. Danny Welbeck is just ace, and so is Theo Walcott. We have some wonderful players. Sweden’s Ibrahimovic is a very interesting character too. Very tall, but big with it, so he looks more in proportion than our gangly (but fab) Peter Crouch. I don’t think he’s quite as tall as Crouchy, but he certainly has presence.

Anyway, tonight we’re going to give footie a miss and watch some more of Series 1 of Spiral (Engrenages) which is riveting.

Some new yarn arrived today which I’d ordered. I’ve never been that keen on King Cole to be honest, but this is 4 ply “Zigzag” and it’s absolutely beautiful. Can’t wait to get started on it. Three balls, three different colours, three garments, all three patterns from Ravelry, very exciting. But will finish current project first. I can’t bear to have more than one project going at once, it’s a bit of a “thing” of mine.

Had a pedicure and manicure this week. Excellent. But tiring. How is that tiring? I really don’t know because the whole thing is a treat. Cup of tea provided, lovely little dog called Lucy making a big fuss of me and sitting on my lap, feel great afterwards.

Second blood test – when I went for my monthly appointment with the doctor I mentioned the huge amount of sleeping I was doing, and he suggested a blood test. So they took two vials of blood, and a letter came through saying I had to have more. So they took another two vials of blood, and a rather mysterious message came from the doctor saying that the B12 and folate was ok, but that the full blood count was to be “reviewed as normal”. I don’t normally have a full blood count, so what does that mean? anyway have another appointment in two weeks, so will ask then.

What a lot of fuss about the Jubilee. If you ask me, we should elect our heads of state. I do think our Queen is a good woman, and has to put up with a lot, but then she does have an awful lot of help, does she not. Three budgets in the Treasury to support the Royals. Prince Charles’ Duchy business is self supporting – it has to be, by law, because you can’t use public (taxpayers’) money to fund a profit making enterprise. And of course their own enormous wealth. Shame that the old Duke isn’t well though. 91 on Sunday too. Bet he’s fed up. He’s such a character – you just never know what he’s going to say next.

And the weather! what on earth is going on? a week or so of fabulous sunshine, and now it’s raining “cats and dogs” as the saying goes. I have been going in the garden for the odd moment when it’s not actually pissing down to try and prop up the poppies, which are just a joy, but messy and soggy after all this rain. They do look much better now. The cat is not enjoying it much either. But she loves a good rub down when she comes back inside, soaking wet!

ED and chappie came to stay Sunday and Monday night because they were rained off their camp site in Wales. They booked a sort of villa thingamajig so they are at least dry, from yesterday for the rest of the week. So on Monday ED, chappie, YD and I all went to Solihull and did some serious shopping. Absolutely exhausting, but good anyway. It was lovely to spend time with both the girls.

New hand problems. Well, I guess you were all getting bored with the old problems. Still got them though, just extra now. The space between the forefinger and third finger knuckles is swollen and sore, and on the right hand the next space is swollen too. Ice packs, painkillers, compressing gloves, and will mention it to the consultant at the hospital next time I go.

Have now knitted something for all five grandchildren. Very pleased with how they all turned out – photos to follow when the children have actually received them, so as not to spoil the surprise.

Hubby took me in his car today to drop off the winter duvets for washing, fetch a large bag of medication for each of us, and get some milk and bread rolls. Somehow our system had failed, and we were short of both. But all done now, and we managed to dodge the showers.

Just heard that ED’s Italian friend is expecting in December! Hooray! more babies to knit for!

And am keeping the weight off – still restricting the chocolate. Not so restrained with wool purchase, though. Had an email from “blacksheep.co.uk” today, they’ve got a sale on some yarns, and I bought 300 gms of two different colours in Crofter DK. It’s really lovely yarn to knit with, looks great knitted up, and goes a long way.

Next knitting project, as soon as I get the yarn (three different lots on order!) is a “monster” door-stop for ED. Sewing project too, she’s asked for one of my home-made bags and chosen the fabric, so that’s for next week I think. It takes a couple of hours, two sessions of about an hour each, so not too much work.

And a trip down to Southampton is planned, cat booked into kennels (. . . . .) for her birthday barbecue bash. Always good. Must make some cakes.

Must phone GP for results of blood tests. I’m still very tired, but not quite as bad, but very achy from the gardening on Monday. I only did about 20 minutes, but it was clearly more than my muscles are used to!

Haven’t heard from Rejane for a while – am hoping all is well in Cholet. A couple of friends have said they’ve sent me emails but I haven’t received them – I have checked the account online and it seems to be ok.

Ooh. Google spotted, and stopped, somebody trying to hack into my Google account from The Netherlands! So I’ve changed all passwords – ha! take that, hackers! Problem now is going to be remembering them all . . . . .