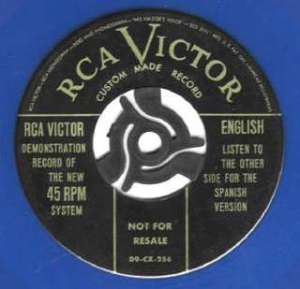 You can see that the middle could be pushed out if necessary to fit the record player. And the records could be stacked one on top of the other and would drop automatically when the last one finished playing. The arm would lift, swivel back to the start position, and wait for the next record.

There was no such thing as stereo, CDs or video recorders/players.
we recorded onto cassette tapes.
only black and white tv until I was about 12, when the first crappy colour tv came out. 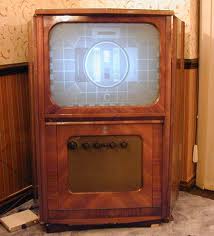 This is almost exactly like the first tv I can remember .

We watched (“Watch with Mother”) The Woodentops, Andy Pandy, Bill and Ben, and, wait for it, Muffin the Mule.

We listened to Listen with Mother on the radiogram (below).

There were no games consoles, no personal computers, no printers.
We played board games or outside in the garden (not out the front, not allowed).

nd dirty) inserted between the sheets to make copies.

There were no photocopiers or fax machines. We used Roneo Gestetners to make more than 3 copies. That involved typing, very hard, on a wax sheet with a carbon sheet behind it, facing upwards, so you could see what you’d typed. Mistakes were corrected with special fast-drying liquid wax.

Then you had to ink the drum, affix the wax sheet carefully, wrinkle free, to the drum, load the paper, and turn the drum fast and hard, by hand, until you’d made enough copies. Hard work.

Instead of fax machines, we had Telex machines. You could type the message straight in, but it was more efficient to type it onto a tape, then feed the tape through while you were actually connected. 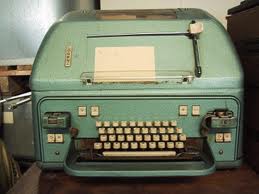 This is exactly like the one I used to use. It was in the most important secretary’s office.That’s it so far folks. More if I can remember any.

One thought on “1950s childhood continued”