Well, it’s cooled down considerably, but is still muggy. Plenty of rain and thunderstorms, so the garden still looks ok, and the lawn is starting to green up a little.

I have various strategies for staying cool. One I described in a recent blog (pyjamas all day), another is having a fan on wherever I am sitting, and I don’t use my hairdryer. I spike my (moussed) hair up and leave it to dry naturally. It looks a little odd but I don’t care. It’s cool.

Recently bought two summer dresses, one full length, and one with a “dipped” hem. I love them both, and have worn one already, to general acclaim. Also two new pairs of summer trousers, one combats and the other in exactly the same style, but plain dark blue. Both 100% cotton. Re-hemmed them (I always have to re-hem trousers, always) and they look and feel excellent. Perfect for when it’s pouring with rain, as I don’t have any summer shoes except Birkenstocks, which aren’t particularly good in the rain. So I wear my trainers with summer trousers.

Knitting – progress. Finally managed to finish off the Cardigan of Doom. It’s currently blocking, and I need to sew on a button yet (it’s a wooden button I chose, so didn’t want to wash it with the button on). Also finished a pair of fingerless gloves, knitted in the round. I knitted a pair last year, but flat, so had to re-write the whole pattern, as it involved pattern on every row. Makes much more sense knitted in the round. Now started on a pair of socks for YD. I’ve done the leg, am going to turn the heel tonight, and am awaiting the measurements of her feet before I do the foot part, because I’d like them to fit right. 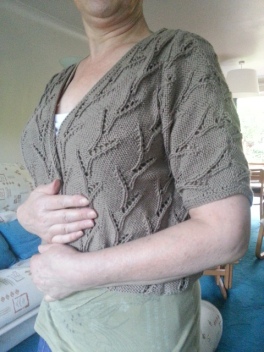 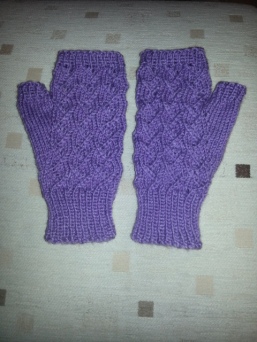 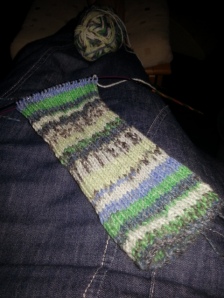 In other news, I am typing this on my trusty old laptop, with Lubuntu installed. I had a new computer a couple of months ago, but hubby needed Windows 7 for a particular music-related piece of software, so he has that one, and I have his old one with my old 1 Tb hard drive. So that one has died now. I had thought it might, as it’s about the same age as the one that died recently. But it’s never convenient, is it. Fortunately I’d just backed everything up onto the network, so I’ve ordered another computer (exactly the same as hubby’s), and with a new monitor this time. i always seem to end up with the handed-down monitor, and I thought it was time I had a new one. Still less than £500 though, from Dabs.com. It’s coming this week, and I’ll have it set up by the weekend. Mixed feelings about it. Didn’t really want to have to spend the money, but am perversely excited about new stuff. Windows 7 – can’t bear the thought of Windows 8, because that’s really intended for touch screen stuff. No, no, no, no thank you. Will use Libre Office on it – recently tried to upgrade Open Office to version 4 and it kept crashing my spreadsheets. Bugger that for a game of soldiers.

Two of the grandchildren are coming to stay on Wednesday, so I won’t have a chance to play with the new pc until Friday, but that’s ok. Can’t wait to see them. Haven’t seen them for six months now. Love them to bits.