Today I was going to go to a local craft fair, to one particular stall, run by a young woman who comes to the knitting group. She’s very young, 16 at the most, and a crochet whiz. She’s absolutely amazing. Fast as lightning, and doesn’t use a pattern either. She makes the most beautiful crochet animals, with a Japanese twist, just out of her head. I’d really like to support her, and was thinking of getting some of her creations for Christmas or birthday presents.

But today’s not a good day. I helped put away the shopping, and had a shower and got dressed, and that’s it. That’s me done for the day. The tremor is quite bad today and I’m all of a doo-dah. Bit weepy and pathetic. Used some of my Chanel No 5 talcum powder after my shower. Washed my hair and everything. Small things to make me feel better.

So I made us both a cup of tea, and sat down at the computer and played Solitaire for a while, then a game of Mahjong with a particular tile set I like (it has Greek letters and Roman numbers, so bends my brain in a different way from the usual Mahjong pictograms).

I’m seeing the doctor in about ten days, and need to speak to her about how low I’ve been. Not sure what she’ll suggest, as I’m on almost the highest dose of antidepressants anyway. But we shall see.

There is some gardening to do – planting a rose and a medlar tree, both gifts, which I’m really looking forward to. But I know that it would just not be wise to do it today. Tomorrow and Monday are forecast to be fine and even sunny, so one of those days perhaps.

The bathroom needs a thorough cleaning, and that’s in the plan too. Not nearly as much fun as gardening though, huh.

Have been knitting things and am pleased with what I’ve made. Just started on a pair of socks for YD. I’ll post photos when they’re done. Fabulous yarn. West Yorkshire Spinners DK. Plain for the welts/heels/toes, and printed for the leg and body. Lovely to knit with.

Also re-organised my earring storage. Next up is necklace storage – special hooks ordered. 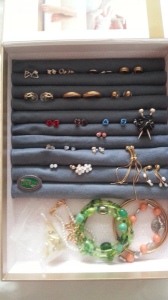 Have been having problems with the network/hi-fi system, but it seems to be sorted now. A bit Heath-Robinson, because there’s a 30 metre ethernet cable trailing across the lounge/hall/study, so that the DS is connected directly and physically to the router. You’d think, in this day and age, that there’d be something a bit less messy. Plans to get it done properly and surface mounted, with proper cable. I’m thinking we need STP (Shielded Twisted Pair) rather than UTP (Unshielded Twisted Pair) because it will be a permanent installation, so doesn’t need to be particularly flexible, but does need to resist interference. Need to talk to the installers. It’s been doing my head in, because his music so important for hubby. It would be for me like not being able to knit. So I like to make sure, if I can, that it all works.