And no, it’s not Christmas yet! I know there are those among you who would love Christmas all year long, but when my offspring were much younger, nobody was even allowed to mention the word until December. Harsh? possibly, but saved my sanity.

What’s been occurring? well, the new fascia for my car stereo is excellent. I’ve kept the old one as a spare because it’s only the display that’s gone. The new one looks brand new (even though it’s not), works a treat, and the display is perfect. So that’s a plus.

Health not so good, however. Throat virus for the last two and a half weeks now, which has involved an extremely sore throat, several days in bed not eating (but drinking lots of fluids), a trip to the doctor to be reassured it’s not bacterial, so no antibiotics, and a nasty cough. Oh, and no voice at all. I’ve been having to cancel everything as it comes along (social outings, even the osteopath today). Well, in reality, hubby has been having to cancel everything because – I have no voice!

I’ve been reading a lot, which is always a bonus, when I’ve been up to it. And serendipitously, one of my favourite authors, Tom Cox, has had a new book published. It’s called A 21st Century Yokel, and is quite lovely. It’s as if he’s speaking to you, telling you about his life. The countryside where he lives now, and where he has lived. His family, including his delightful eccentric Dad and his lovely Mum – who does all sorts of craft things. His friends and his hobbies (bat watching, beaver watching – the dam-building kind – swimming in rivers, very outdoorsy).

It’s been a pleasure to read. I’ve savoured every word. I get a similar feeling of one-ness with the world when I read Bill Bryson’s books. Both authors demonstrate an understanding of life and nature that chimes very much with my own. Or rather, informs how I feel about these things.

Knitting has had to take a back seat. I have completely lost my knitting mojo. But, you’ll be relieved to hear, I re-knitted the cardigan I’d wrecked, in different yarn, and I much prefer it anyway (no photo, it’s a gift). So all the Christmas knitting is done, and four child/baby hats (they only take an evening or two). All in West Yorkshire Spinners Aran in various “cocktail” colours. I have started on a lovely jumper for hubby, but only managed one evening’s worth. It’ll still be there when my knitting mojo returns, however. I do occasionally pick it up and feel it and look at it, just to make sure I still like it. (I do). 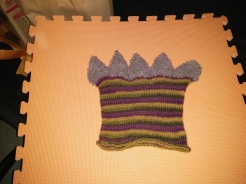 It looks grey, but it’s actually denim blue. West Yorkshire Spinners Aran, 75% wool, 25% acrylic. Not terribly difficult to do, but stitch markers have changed my life, so I use them if I think there might be the slightest possibility I could go wrong. Circular needles, too. At this stage, after only a few inches, it makes very little difference what sort of needles I use (except that I’m much less likely to drop a needle than when I’m using straights!), but when the work is bigger, the weight falls on my lap, not my shoulders.