I did my ironing today. Nothing remarkable about that, you might think. However, there didn’t seem to be very much. I have promised myself I won’t leave it longer than one week, or else it just piles up so much I can’t face it. But there were four tops and one pair of trousers. Hmm. Odd, I thought. When I packed everything away, I’d dropped a serviette, so thought I’d do that next time. As I popped it into the basket in the utility room, I saw the rest of my ironing. Yeah. What a doofus. Ah well. I did half of my ironing today.

Also re-made the home-made sleep masks, as they were too tight and crunched my ears. That was quite satisfying.

Waiting for quotes for leylandii trimming, willow tree polling and a further leylandii hedge (full of ivy, tree saplings and generally a pain to maintain) digging up at the front (to be replaced with a photinia Red Robin hedge).

Very windy and rainy today. Apparently it’s storm Callum. What a ridiculous name for a storm. It’s like calling it Colin, or Henry, or something nice and kind. Ho hum.

Knitting is going ok. All the Christmas stuff is done (not doing very much Christmas knitting this year, it can be too stressful). Here’s a couple of gnomes, aka wizards. Am now doing myself a “mistake rib” scarf in coral coloured cotton. Mm. Easy to do and looks quite complicated. That’s my kind of knitting. Also here’s a photo of the puffin I knitted. 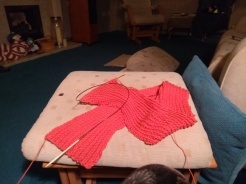 Had my flu jab on Monday. Sore arm is all, much better than the flu. Also need blood test for potential polymyalgia, but will do that next week so that the results are not skewed by the flu jab.

Have any of you heard of Lillian Bilocca? I’m ashamed to say I hadn’t until I watched the tv programme with Maxine Peake. She was a brave, difficult woman, who managed to get enough support to make trawlermen’s lives at sea much safer 50 years ago. Here‘s a link to her Wikipedia page. I feel so sad that she had such a dreadful time after she’d achieved her aims (working radio on board, qualified radio operator, full crew on every trawler, proper training for crew, and mother-ship with medical supplies and staff on board). Good for her, say I. The zeitgeist at the time was testosterone-fuelled machismo, domestic violence was the norm, and women didn’t “interfere” with men’s work. Until 58 men in 3 trawlers were lost at sea in a matter of weeks, one January and February. Then Lillian (Big Lil) did interfere. Mm. And made a huge difference. Trawlermen were safer, presumably insurers didn’t have to pay out so much, so often, and the owners , despite the extra expense involved in the “charter”, were better off too (I assume).