The weather is lovely at the moment, which is almost unheard of for a British Bank Holiday. The cat is loving it and is in and out of the garden, checking she has food, then scampering back outside again. And she’s ten years old now, so scampering is really good.

Gardening has been a joy. Everything’s growing and green and pretty. 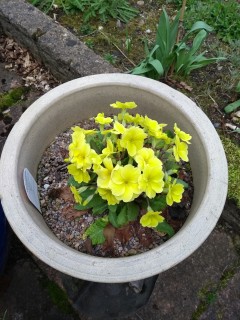 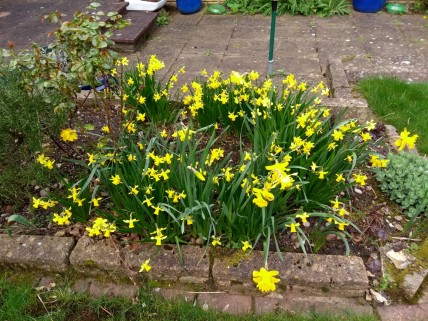 The knitting has been a bit up and down. Knitted a hat for a Christmas present which was supposed to be worked in the round. The cables were so curly, even after being straightened in hot water, I just couldn’t deal with it, so knitted it flat. It looked ok until I sewed it up, and it was a disaster. So after considering the alternatives (dumping it or giving it to the charity shop – nobody would have bought it anyway) I unpicked it and knitted up a different pattern, in the round, and it’s great. Thank goodness.

Also started a pattern called Zick Zack which several people at the knitting group have  done in various colourways, and that was a disaster too. It’s a 12 stitch repeat, with one increase and one decrease in each one. Got the hang of it fairly quickly, but after six rows (every damn time!) I was one stitch out in one of the repeats. I wasn’t sure if I was not increasing when I should or decreasing when I shouldn’t, or whether I’d simply dropped a stitch, but I just couldn’t see which. So. I decided not to do it in 4ply cotton (can’t wear wool), or in two different colours, but have bought some double knitting variegated cotton (Sirdar Cotton Prints DK, in Sea Glass). I am going to cast on tonight and we shall see.

However. I have successfully knitted a bumblebee from Let’s Knit magazine, and although it was a big faff, I’m very pleased with it. Also, five months after purchasing the yarn, finished a V neck top for hubby. Rowan worsted yarn, pale grey, pattern called Textured V Neck Vest. The neckline was a bit fiddly, but it’s a success I’d say. 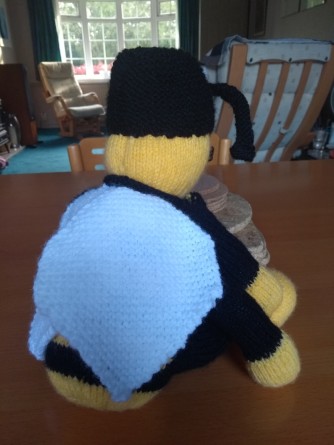 I’m having a bit of a meltdown about blasted circular needle cables. They drive me crazy. I have mostly interchangeables, some fixed, but I’ve been keeping them curled up and trying to straighten them out when I use them. It’s not working.

So I have a new plan. I’ve ordered a wrap/roll for keeping the needle tips in, which will take up less space than the 2 x 3 litre Really Useful Boxes, and for the actual cables, have ordered some cotton reels.  This is what it should look like when I’m done. Thank you Jennifer T.

And buoyed by my successful research, this morning had a BIG sort out of my knitting bag/s. I keep a bag with my current project in it, and various specific bits and bobs. I also keep a bigger bag nearby with various generally useful bits and bobs, and the next pattern I’m planning to knit. 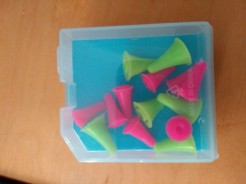 The clue, you may have spotted, is in the “various” and “bits and bobs”. I managed to sort out what is useful/useless and sort it into what I need to dump, what I occasionally use and what I always need, and have emptied one complete little box. The other little boxes are also much lighter, and better organised, so I only need to carry one of them with me at all times.

In the longer box is a yellow row counter. It’s the best one I’ve ever had. The centre is metal, and sprung, and is at least 50 years old. You can’t buy them now, they’re for sale as “retro” on ebay, but it has never, ever broken. The ones you buy now are all plastic, and break very easily. I think it’s called “built in obsolescence”. Very aggravating.

The denim bag was made for me by my French friend from an old pair of jeans. I lined it and took the Velcro out so there’s nothing to colour or snag on the yarn. It always, always prompts compliments. So thank you again, Réjane!

Some people (my family) think I’m a bit of a neat freak, but I find that order makes my life so much easier. I get very frustrated very quickly if I can’t find something I need, not least because there is a real risk I’ll lose the stitch/my place in the pattern or just forget what the hell I’m doing.

So there we are. Ups and downs as usual. But mostly ups.