Christmas Day was lovely. Went to YD, having fetched Mother, and YD’s brother-in-law and young family were there. Food was excellent, had a delightful time and all four children were just sweet.

Brighton and Southampton, where we went on 27th to visit family, were also a delight. Weather was surprisingly mild and sunny.

No knitting mojo at all. None. Nope.

Had various plans for this week – bit of baking, into Solihull for a bit of voucher-spending, library books back, charity shop – not happening. Not this week anyway.

Have decided not to beat myself up for being tired. Just roll with it and sleep a lot.

Ooh. Also. Started a new thing. Am only allowing myself the recommended daily allowance of sugar. 30 gms. Sounds a lot, but I discovered I was getting through at least twice that amount. I’m still able to have chocolate, but a fraction of what I was eating! Feels ok so far. Day four today.

Well. A busy summer. But fun.

A few days in London in July – went to see Shakespeare’s The Tempest at the Barbican Centre, by the RSC. Absolutely amazing. The special effects (holograms) were something to see. Really, really good. London is just so busy and fraught, but so wonderful at the same time. All sorts of different people, ways of dressing, living, everything. And the food was excellent.

Then mid August stayed a couple of nights in Brighton, saw almost the whole family in one go! actually got to swim in the sea, which is just one of my very favourite things to do, then off to Southampton, stayed in a different hotel there, and spent some time with ED and LCS. Lovely. Just lovely. I’d made a Bakewell Layer Cake and a carrot cake, both tray bakes, and they went down rather well, I will say. Mm.

All the grandchildren are just a joy. Oldest one will be 16 tomorrow – gasp! where did the time go? He’s No 7 in the UK for his age group for racing breast-stroke. Wonderful, just wonderful. Youngest one is now 5 months old. Bless.

Garden is looking great, although I’m doing battle with the pesky slugs, which are trying to kill my new asters. Bring it on.

Knitting going well, no pics because they’re all for Xmas gifts. New yarns in stock in local yarn shop, I have a bagful of beautiful stuff and am starting to get through it now.

Thing is, when there’s lots of things going on (see above) I get all fraught and panicky. It’s like there’s too much input, and I can’t cope with it all. I can sort of deal with the planning and booking and stuff, but then I’m done in. Luckily I was able to sleep when I needed to all summer, so it’s all ok, but it would be just great if I could handle it all better than I do.

They’re taking my Disability Living Allowance away. I knew they would, but what a bummer. Also I had paid enough National Insurance Contributions to be entitled (eventually, in another 4 years) to my full state pension, but now they’ve changed the rules and it includes people like me (how does that work then? they’re allowed to change the rules retrospectively?) , so I have to pay in more, but I need to check whether it’s going to be worth it.

Been watching some excellent tv. A four-part series called The State, which told the story of four Brits travelling to Syria to join the so-called ISIS. Harrowing, of course. But interesting too. Thoroughly researched, the story told of how the main characters became disillusioned, to say the least, with the regime, the strict rules, the savage punishment for even minor infractions, and the injustice and stupidity of it all. But what it didn’t explain is why these people went all that way, and why they didn’t know it would be like that. There must have been an excellent marketing policy, full of half-truths, in place, is all I can think.

Then something called “No More Boys and Girls?” which was fascinating. A class of 7 year olds in a school on the Isle of Wight were followed through a half term of changes instigated by their teacher with the help of a doctor. To start with, all the girls seriously underestimated themselves, and the boys seriously overestimated themselves. Girls were identified by both genders as “pretty, mothers, nurses” and boys as “strong, brave”. By the end of the term, girls were “strong, clever, kind” and so were the boys. Clothing with slogans on came in for particular criticism, as well as the distinction between “girl” and “boy” toys. One of the most intransigent boys turned out to be kind, empathetic, and understanding. One of the least confident girls actually wept when she did really well at something! Very interesting. They brought in people who bucked the stereotype of their job, for example a female car mechanic, a male make-up artist, a male dancer, and the children were amazed, and loved it! It changed all their perceptions of what girls can do, and how boys can behave. I wonder if the pressure for boys to be strong and win at stuff has the same effect as the pressure for girls to be pretty? whether or not it does, it’s important to strive for equality. The school is expanding the programme to all the classes, and the teacher of the class, who is lovely, has done a presentation to the Institute of Education. Excellent.

The cat had a small adventure a few weeks ago – a gash on her leg which needed 3 stitches, which when you know she only weighs 3 kilos, is quite a lot for a small cat. We don’t know how she did it, but it was quite deep, and involved the (expensive) emergency vet, anaesthesia, wearing The Cone of Shame or baby pyjamas cut off at the waist to stop her gnawing at the sutures. Luckily we’re insured so got most of the money back. And she’s fine now.

That’s about it for now.  If I think of anything else I’ll blog again.

Just spent a weekend in Brighton. It was absolutely wonderful. The weather was kind, sunny and windy, and it was perfect. ED and his GF have just bought a beach hut, which is where we sat drinking tea and eating various foodstuffs, with family and friends.

I spent some time looking for smooth and/or round stones with the youngest child there (nearly 7). He was directing quite a complicated game but I just followed instructions, and found – a fossil! in fact two, in one stone! I’m so excited about it. Apparently there is an Echinoid (sea urchin) and potentially a bivalve or a brachiopod. I have a friend who’s very, very knowledgeable and clever, and that’s what she says. I’m going to show her the fossil on Saturday.

In the evening there were further celebrations and I met some very interesting people. I was talking to one young woman, who, Réjane & Yves, comes from Cholet! she was as surprised as I was that I actually knew it! She’s called Sylvenne and designs and makes jewellery. What a coincidence. She said that nobody else had ever heard of it. But of course Solihull and Cholet are twinned, so I had heard of it anyway. Fancy that. It was lovely to be able to talk French for a while.

The hotel, however, where we have stayed twice before, was very disappointing this time. Overpriced and understaffed. We have written a long email listing our complaints before reviewing on TripAdvisor. We shall see. Their website assured me that every room had a hairdryer. When this turned out not to be so, I asked to borrow one at Reception and was asked for a £5 deposit. That’s all fine, but I had to then ask for the deposit to be returned. We also had to ask, twice, for our final bill to be recalculated, as it was just wrong, and too much. Not good.

And I’ve left Facebook. I had a very difficult discussion with friends of a friend about the refugee situation. In one of the conversations I used the word “underclass”. I really did not intend to offend anybody, and I think if I am offended by the use of a word, I just say “I find that offensive”, but I was subjected to a tirade of very personal insults. When I apologised for using that word, the rant was simply deleted. In the other conversation, I was accused of “trolling” and not wanting anybody else to have a different opinion. Not true, just not true. I should clearly, in hindsight, not have engaged in these conversations. I felt assaulted, and although I am missing Facebook a little (I belonged to a knitting group, and had “liked” various pages such as The Poke, Bill Bryson and Bill Maher), I’m not sure I’ll go back. It’s actually quite fun in the “real world” but the contact with friends is less of course. More time for knitting, though (and blogging)!

Summer appears to be here, however fleeting it may be. Hooray! not too hot, just sunny, breezy and generally pleasant.

Spent the weekend in Brighton with ES, MS (Eldest Son, Middle Son) and their families. Excellent. A wonderful time was had by all. 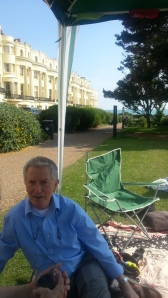 I’m absolutely knackered now, of course, even though hubby did the driving. Have spent hours and hours asleep in the day. But am starting to feel slightly more human, now. (It’s Wednesday today). Even managed a little gardening this morning. Love my garden. 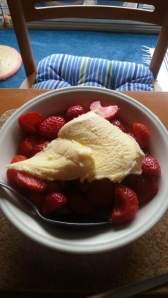 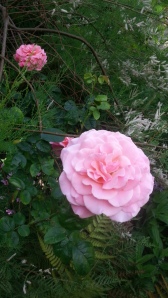 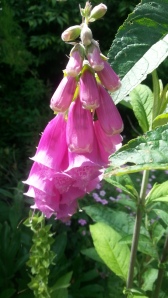 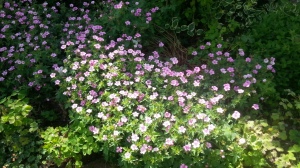