I can’t believe I have yet another throat infection and no voice. Third in three months. And last week – or was it the week before? – I had what I think was probably a nasty migraine. 24 hours of blinding headache and bad nausea. Took another week to recover. So this year so far has been a bummer, healthwise.

Meanwhile, the Aged Mother has been in hospital, and is now home recovering. Youngest grandchild has been born, in Dublin, little boy, all doing well. Eight grandchildren! how lucky are we! ESW (youngest grandaughter) is just a joy, but currently has a virus. LCS (ED’s little boy) is fine and also a joy.

ES is with us this weekend, having a sleep at the moment and leaving when he wakes up.

The garden is looking lovely. Must deadhead the daffodils when I feel up to it, but it’s cheering to look out at it on a sunny day like today.

Knitted a little jacket and crocheted a blanket which will be in the post tomorrow for youngest grandchild (initials HR). Photos when the parcel has been received. Currently knitting Dobby socks, as requested, for a grandson’s upcoming 13th birthday. They are Dobby socks because one is green, with Golden Snitches knitted in, and the other will be red, with broomsticks knitted in. So that means knitting in the round (a tube), no seams, stranded (different colour yarns), turning a heel and grafting the toe. All good fun and makes it interesting to do. Again, photos when received.

Missed the Stitch Up at Stitch Solihull yesterday because I was just too damn poorly. I think that’s two I’ve missed. Grump.

Goodness me. I have been meaning to blog for a while now, but life has been just slightly fraught here.

Have just read Harry Potter No 8 – The Cursed Child – amazing! am planning to go and see it at the theatre somehow or other. Really, really good.

Lots of medical appointments, including osteopath for wonky back (me), for both of us.

Visits from family – absolutely wonderful to see everybody, just lovely. It’s hard to believe that the oldest two grandchildren are 15 and nearly 15, and the youngest are nearly two years old, and seven and a half  months old. All just delightful.

We had a date for the boiler service but the man never turned up, and it proved to be difficult to say the least to re-book. So I wrote a fairly snotty email and it’s being done on Friday morning, and they’re paying us £30 for the inconvenience. So that’s ok then (sort of).

We also had a date for the man to assemble and fit five cupboards in the utility, but he didn’t turn up either. We did try to contact him (two phone calls, 10 am and 7 pm, and a text message), but no reply at all. Strange, as he was very enthusiastic about how wonderful we were to work for (he did the refurb of our kitchen). However. New plan in the making. Frustrating though, as we’d stripped the room for him. But it would be worse if we had taken time off work . . . .

This week has been particularly fraught and busy, and we are both really tired. But next week looks much less manic, so we can relax and catch up with ourselves. I really thought retirement would be restful! but then I thought having a baby would involve four hourly feeds and sleeps in between. How wrong can a person be.

Yesterday I went to Stitch and Sip at the local yarn shop, and it was lovely! lots of laughter and banter, and I actually got some knitting done. Excellent. Also a couple came in with their nephew. The couple were 101 and 102 (he was in a wheelchair), both as bright as a button, their (chatty and funny) nephew was 74 and there was a carer too. The 101-year old woman lives nearby, and knits as well as crochets, so we tried really hard to persuade her to come to the Stitch & Sip sessions. She was born in 1915. We were all trying to work out all the changes she’s seen in her life. It would be great to see her at the group.

Been knitting loads for Christmas, no pictures yet of course, and a little cardigan for a baby boy due this month. Just started a cardigan for my friend Charlie’s little girl. I made her one when she was 3, and she still wears it! a little on the small side now of course . . . and the one I’m knitting now is in a sort of mermaid pale green. 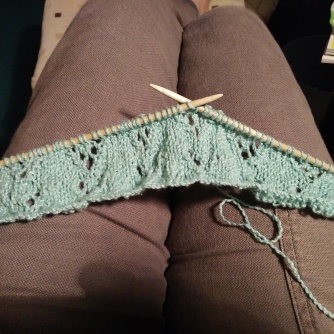 The garden is looking ok too. There is a large phormium which isn’t terribly well placed, too near the washing line, and hubby sometimes finds he’s been poked in the eye by one of the leaves. So I’m getting it moved to the back of the garden, where there is a dead pieris which needs digging up. Phoning for quotes tomorrow. Also have some “Seeds for Bees” which I’m going to plant soon, and once the phormium has been moved, I’ll plant some bulbs and a small ornamental grass (which won’t poke hubby in the eye) in the space left. Exciting.

The sweet peas I grew from seed eventually came up trumps, but next year it’ll be small plants rather than seeds. The dwarf rudbeckias also eventually grew, but what a faff. I do like them though, bright yellow really cheers up an autumnal garden. Along with the bright pink sedums (though not adjacent to each other). The purple smoke bush (cotinus coggyria) is lovely, and the leaves turn a beautiful colour before they fall.

Watched “The Danish Girl” last night. Melancholy, beautifully shot, and a lovely, if very sad, film. Very brave of the actors I think. Equal weight was given to both the husband’s and the wife’s feelings about what was happening.

Have recently discovered nail “wraps”. Yeah. I’m absolutely crap at putting on nail varnish, partly because I’m just clumsy, partly because I have a tremor. So it’s a major faff, and then within an hour or so I’ve smudged or chipped it. However, nail wraps are just the job for me. Have a look here and see what you think. I have some samples, so I’m just trying to get my hands into a suitable state (the nails are ok, but the skin round them is dry and flaky) and I’ll have a little practice.  My friend is having a “party” on Saturday night and I’m hoping to go.

I can’t believe that’s all. But it is for the moment.

I can’t believe it’s over a month since I blogged.

On Monday ED came to stay for a couple of days, which is always just delightful. This time she took me to Harry Potter World for my (belated) Christmas present. It’s belated because I haven’t been well enough to go. Until now. It’s absolutely amazing. I can’t remember a better day out. I took 100 photos and videos (trimmed down now!). It is so well done, I spent the whole day saying “Oh my God” and “it’s so well done”. I loved it. And now I want to read all the books again! of course. 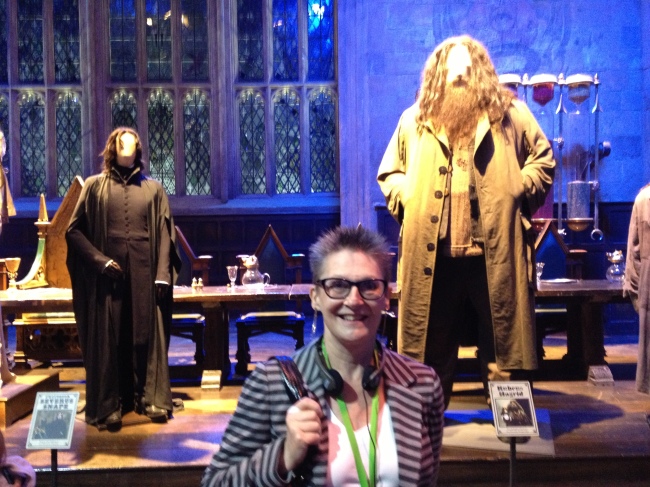 Things have been quite busy here, not least because I’ve been going to Stitch & Sip (the knitting/crochet group) twice a week. I love it, I really do, but it’s just too much. So I have had to rethink that, and have decided that I’ll go one week on a Thursday (with home baked goods) and the following week on the Saturday. I really like both groups of people, and would miss them if I only went on Thursdays, or on Saturdays. So that’s my plan.

Have also decided to learn to crochet, and my next knitting technique is going to be sock knitting. I’ve cracked knitting in the round (with two circulars) so that’s my next big plan. Am booked on courses for both at Stitch Solihull. Exciting.

I have been minuting the meetings of the newly fledged Patient Participation Group at our local surgery, but will have to stop, probably after the next meeting. It’s too much – first of call because of my wonky hand (of which more later) and also too much energy required for concentration during the meeting. It flakes me out completely.

I am going to a union meeting tomorrow. I’m a retired member of UNISON, and the local branch has just started up a new Retired Members Section. In some ways I’m looking forward to it, in others I’m a bit worried. We will see how it turns out.

Knitting – it has just taken me six weeks to knit a child’s top and matching doll dress. I am very pleased, but it is the sort of thing I would have got done in a couple of weeks in times gone by. I also managed to lose the buttons I wanted to use, but managed to find some nice ones anyway. Here’s a photo:

Saw the doctor today. I have been referred to a bloke who will see if he can sort out my shakiness (they seem to call it tremor these days) and another bloke for my poor old hand. But am finally taking Tramadol again, which just works. And I can take paracetamol as well in between the Tramadol doses. My cholesterol is 6.something, so I need to reduce my cheese intake. Boo. On the plus side, I don’t have a chest infection, despite most of the symptoms. Which is good. I think.

My poppies, which are just fabulous, have been a wonderful display in the front garden. I grew them from seed, and they’re a dark orange. In the evening, in the sun, they look as if they’re lit up. The rain has bashed them about a bit, but people actually stop and point them out to each other – including the refuse collectors. It’s so lovely to think that they brighten other people’s days too!